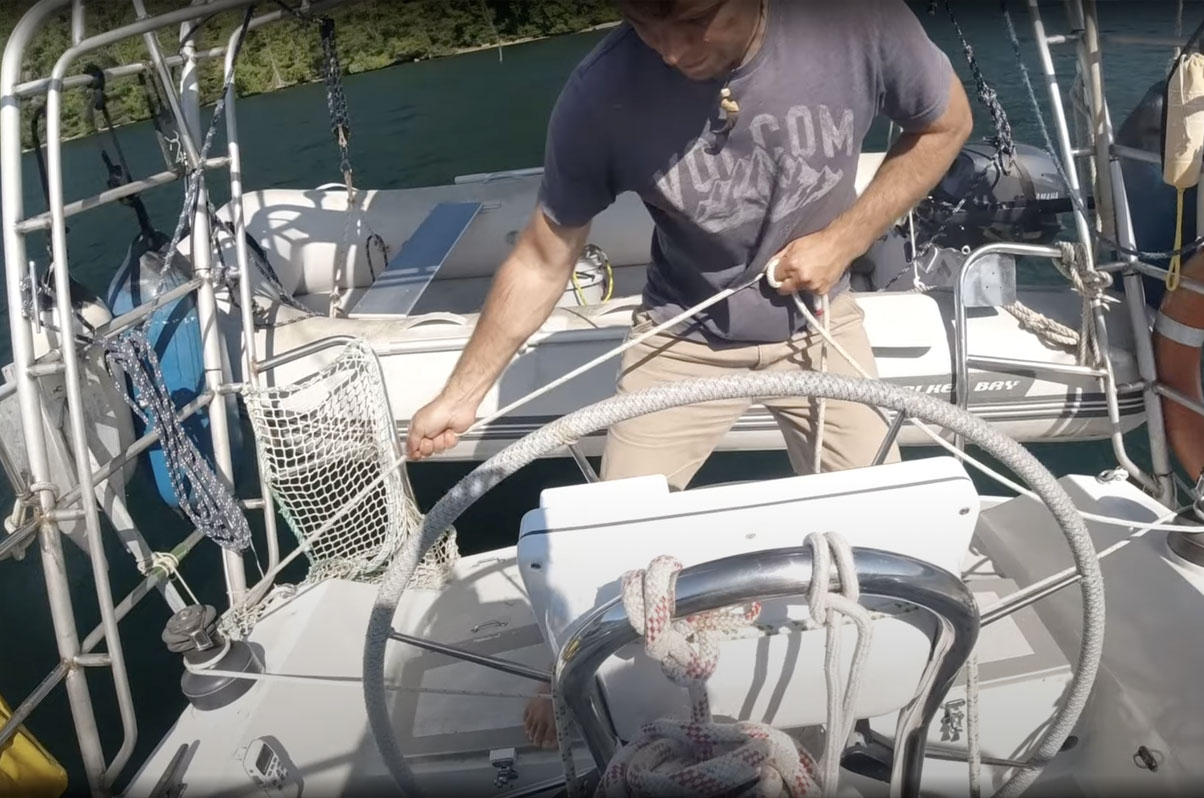 It seems that when things are going to go wrong, they always do so in the middle of an already stressful situation.  We had just spent two months in the Broughton Archipelago and were an hour and a half from civilization.  After spending three days cautiously working our way down Johnstone Strait, we had reached north of Seymore Narrows in Discovery Passage and decided to pull into Plumper Bay to do some fishing while we waited for slack at the narrows.  We had about 15 knots of wind blowing NW into the bay and we decided to slowly troll along the shore to look for salmon, as that is where they like to hang out.  It didn’t take long to get a fish on and with only two of us onboard and no autopilot, I was doing double duty on fish net and helm as Logan tried to get the salmon to the boat.  As we were about the net the fish, I realized that the boat had turned to point straight at the cliff as the wind was turning us around, so I put the net down and grabbed the helm to quickly turn us back out to sea and away from the cliff which was fast approaching.

But as I turned the wheel, we heard a pop and suddenly the wheel became extremely easy to rotate. The wheel was turning quickly but the boat was not responding.  With a salmon on the line only feet from shore, we had completely lost our steering.

With quick thinking we hooked up the emergency tiller, but it wasn’t working either.  The steering arm had jammed on the tiller and it wasn’t going anywhere. Next we tried to use our prop walk to move us away from the cliff by moving between forward and reverse.  This was by no means a long term solution, but we luckily had the cliff on the correct side for our prop walk to actually bring us away from the cliff instead of closer to it. As we slowly moved away from the cliff  as I switched between forward and reverse, Logan hammered and hammered on the steering arm to get it loose so we could use our emergency steering system.

Finally after plenty of hammering, swearing and smashing himself in the head, Logan was able to get our steering arm loose. This allowed the emergency steering started working and we were able to maneuver our way farther into the bay to a place where we could safely anchor.  Somehow during this process we also managed to keep our fish on the line, alive, and we were able to bring it into the boat for dinner before we reached our anchoring spot.

The anchor hooked up first try and Logan figured out what had gone wrong with the steering and fixed it, all in time for us to make it through Seymore Narrows at slack current.

That night we anchored in a bay on Quadra Island and I don’t think I have ever been more relieved to drop the hook. The entire steering ordeal had only taken about an hour and a half from beginning to end, but it felt like 12 hours with the amount of stress it caused. With all of that stress, we learned a few important lessons.  The first is how important it is to know the systems on your boat.  If Logan had not been so well acquainted with our steering system, we wouldn’t have been able to figure out how to get the emergency steering working, let alone fix the steering on the fly.  This also made me realize how much more acquainted I needed to become with our systems if I was going to be able to really feel confident sailing our boat. The second thing we learned was how we both handle highly stressful and intense situations and how we work together in those situations. It turns out that we work surprisingly well together. We were able to play off of each other’s strengths and only have one of us panicking at a time, all while not fighting with each other or screaming at one another, which meant that things were accomplished smoothly and without escalating or becoming worse than they needed to be.  Keeping calm and organized in a high stress situation can be a lot harder than it seems, so this lesson, in particular, felt like something to be proud of.

If you are interested, you can watch this entire experience unfold on camera over on our Wayward Life Sailing Youtube channel in chapter 4 episode 42.  We just so happened to have the camera rolling for the entire experience thanks to filming our fishing adventure!