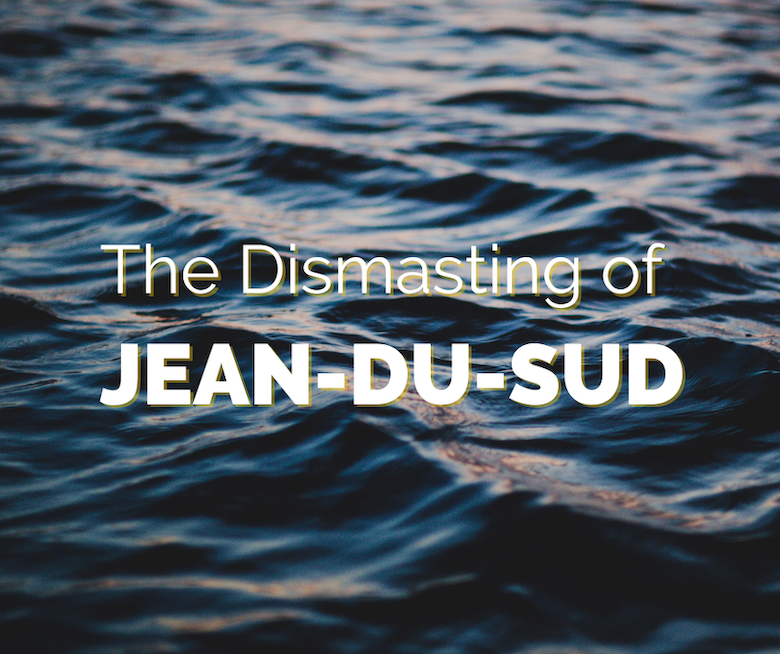 Ocean, Bass Strait, the Tasman Sea and entered the Pacific Ocean. On Feb. 15 1982, after 156 days at sea, I was 700 miles east of New Zealand, on latitude 47° South. It had been blowing a storm for the last 24 hours, and Jean-du-Sud was running before it, under a double-reefed foresail sheeted flat.

That summer had been exceptionally hot in Australia, and vast high-pressure zones would leave the continent and drift East. I got caught between one of these highs and a normally deep depression, and that caused a very steep pressure gradient, with winds reaching Force 10.

I knew that there was a danger of being knocked over and was prepared accordingly: the deck was bare, all openings closed and below, everything was stowed or seized. I was lying in my bunk with two stout pieces of nylon webbing tied loosely but solidly around my body to keep myself from being flung across the cabin.

At 1 a.m. came the first knockdown with the mast well below horizontal. The self- steerer brought the boat back on course despite its aluminum storm vane being bent. Only apparent damage, the line securing the aft end of the boom to the backstay had parted. From below, I could see it swinging lightly with every roll, still held by the topping lift and mainsheet.

During long minutes, I hesitated: Should I leave it the way it was, or take the risk of going up on deck to fix it? I knew that if I was knocked over again, the topping lift would part and this could cause the gooseneck or boom to break.

I was pulling up my oilskins in the narrow space opposite the head, when I heard a great noise. I felt Jean-du-Sud thrown over once again, but this time, the movement did not stop and in a flash, I realized I was on the cabin top.

We were going through a complete roll. In a matter of seconds, my world was right side up again. The damage below was minimal. Everything was well stowed and only a few buckets of water got through the closed hatch. But looking through a porthole, I could see the boom lying on the side-deck.

I refused to believe that the mast had gone and thought the gooseneck had broken. But when I opened the hatch, I had to face reality: the mast was overboard, broken in two, the lower section hanging over the starboard side, still held to the step by the halyards. The upper section had sunk and was hanging below, still held by the rigging. Fortunately, Jean-du-Sud did not appear threatened by the mast punching a hole through the hull, so I did not cut the rigging to jettison it.

Without the inertia of the mast, the movement of the boat was amplified and it was almost impossible to stay on deck. I could not do anything, so I went back to my bunk, as it was the only place where I did not have to hang on to anything I could grab.

The shrouds still holding the mast that was hanging below were chewing into the toerail with a sickening noise with every jerk of the boat. At dawn, they had carved a deep groove. But I refused to let it go. I had built every piece of it with great concentration and had the impression I knew every screw, every rivet by its first name. I also knew that I could not afford to purchase a new mast and all its rigging.

The following day, the wind dropped to Force 9, but the seas were still huge and each move I made required 10 times the effort. I managed to detach the boom and recuperate the mainsail, which did not suffer, being tightly furled. But I could not say the same for the staysail, which was still hanging below; to get it aboard, I would have to pull up the upper section of the mast and after a few attempts, I had to admit defeat.

The movements of the boat were still too violent and each halyard I hauled on soon parted after chafing against the broken mast.

I had maintained daily radio contact with a ham operator and attempted to rig a jury antenna. In a small vice held to the deck by suction, I clamped the antenna lead and a two-meter stainless steel rod. If this jury antenna did not allow me to reach Montréal, at least I had a chance of being heard in New Zealand.

When radio contact time came, I was dismayed. No signal came out of my transmitter. Some water must have entered from the Dorade vent above the head and found its way to the transmitter. I bitterly realized that a radio is great as long as it keeps working, but if it stops, it will cause undue worry to those who used to daily hear from me.

In my last transmission, I had reported Force 10 wind and huge seas. What conclusion will they draw from my silence?

In spite of the strong roll, I took the transmitter apart and spent the rest of the day trying to dry contacts and relays, using Q-tips and alcohol. No success. It still refused to transmit. I only succeeded in draining my batteries.

Now that I was motionless, I could not use my hydro-alternator, driven by a propeller towed behind the boat. I had two small solar panels, but they were useless in this totally overcast sky. My Ham rig could not transmit, but it could still receive and I kept hearing people calling me. After a whole day of hesitation, I turned on my emergency beacon (this was before the satellite EPIRB). Not that I wanted to be pulled out of here.

I was in no immediate danger and was confident that I would eventually be able to reach land. But my main concern was reassuring my family and friends by telling them that I was still alive. I knew there was a minute chance of an airplane flying over me and receiving my signal. But I felt I was doing something positive. I also rigged a jury antenna on my VHF and sent a call every hour or so.

Looking why the mast broke, I noticed that the two lower-shroud chainplates had pulled from the deck, bolts neatly sheared. The mast broke at the first spreaders. I realized it was entirely my fault. I had increased the size of the bolts holding the backstay and capshroud chainplates, but had judged these strong enough.

The original lower shrouds were 3/16 in. (5 mm) while the rest of the rigging was 1⁄4 in (6.4 mm) and I replaced the whole rigging with 7 mm cable. I had figured that the resistance to shear of the 3 1⁄4 in. bolts on each chainplate was equal to the tensile strength of 7 mm cable. Now, I know it was not.

Two days after being dismasted, I finally succeeded in pulling the mast on deck. I had to get in the water and dive down, to tie a line around the center of the section that was still hanging vertically below the hull. Only this way, could I bring it in a horizontal position and winch it up.

In trying to untangle the mess of lines on deck and in the cockpit, I realized the amount of rigging necessary for single-handed sailing — halyards, sheets, down-hauls, topping-lifts, running backstays, reef lines, steering lines, lifelines — was tangled as if a huge spaghetti fork had made a few turns on deck!

The next day, I succeeded in rigging the boom as a jury mast, but the seas were still too heavy to step it.

At last, after four days, I was sailing again, doing 1.5 knots under jury rig. The Chatham Islands, the nearest land, was 300 miles to the West, to windward. I could not sail closer than a beam-reach, so I headed North, hoping I would eventually find easterly wind. After two days, the wind turned to the southwest, then southeast. Finally, a week after the capsize, it blew from the east and allowed me to head straight towards land, at 3 knots, just fast enough to turn the hydro- alternator and send a few dozen amperes into one of the batteries. This encouraged me to try again to fix my transmitter.

This time, I dared take it a bit further apart and I could reach contacts and relays I had missed in my first attempt. Hurrah! After 8 days of silence, I finally succeeded in contacting Montréal. First a weak Morse signal, then my transmitter warmed up and I could take the microphone and announce I was still alive.

Ten days after being dismasted, Jean-du-Sud reached the Chatham Islands, a group of small islands and rocks, in the Pacific Ocean, 500 miles East of New Zealand. It was almost March and the end of the Southern summer. The time needed to repair the mast would make me arrive at Cape Horn at the end of autumn, so I decided to wait until the following season to pursue the voyage. I pulled Jean-du-Sud ashore and came back to Québec, to edit the film I had shot during the first leg.

A visit at the plant of Yachtspars New Zealand, in Auckland, on my way back, dispelled my worries about repairing the mast. I would be able to do the job myself when I came back. I could see a mast being repaired and found answers to all my questions.

I still had a 1.5 meter section of the extrusion I had used to build the new mast, in Saint- Malo. I had considered taking it with me in case of such an event, but had finally left it there, my boat being already overloaded. I had it shipped to Montréal and when I returned to the Chatham Islands the following September, I stopped again at Yachtspars. They kept 6 inches to replace the irregular edges of the break and in the rest, cut a sleeve. Two cuts on either side of the sail track, with a round at both ends to avoid concentration of effort. They insisted on the necessity of an intimate contact between the sleeve and the mast, achieved by tapping the sleeve, once it was in place, and driving bolts to pull it against the inside of the mast.

Back in the Chatham Islands, the following October, I tackled the job, trying to follow their recommendations closely, adding for safety a generous amount of epoxy glue and stainless steel rivets.

I was worried about stepping the mast. Waitangi harbor was at the bottom of a wide bay open to the north and a permanent surge prevented any attempt to step the mast afloat from the dock. Ashore, the small crane used to handle goods would not be high enough.

I was forced to use the system I had foreseen, in case I had to step the mast by myself, without a crane, using only a spinnaker pole, a hinged mast-step and cap-shrouds hinged at the same level. I had used it often with the previous mast, but not yet with the new, which was more than twice as heavy, with its heavier section and oversize, double- spreader rigging.

On December 8, the mast of Jean-du-Sud was stepped again. Two weeks later, I left the Chatham Islands, sailed across the Pacific Ocean, rounded Cape Horn and on May 9 1983, landed at Gaspé, Québec, after 28,200 miles and 282 days at sea.