Living off the Land on a Wooden Schooner, Part One 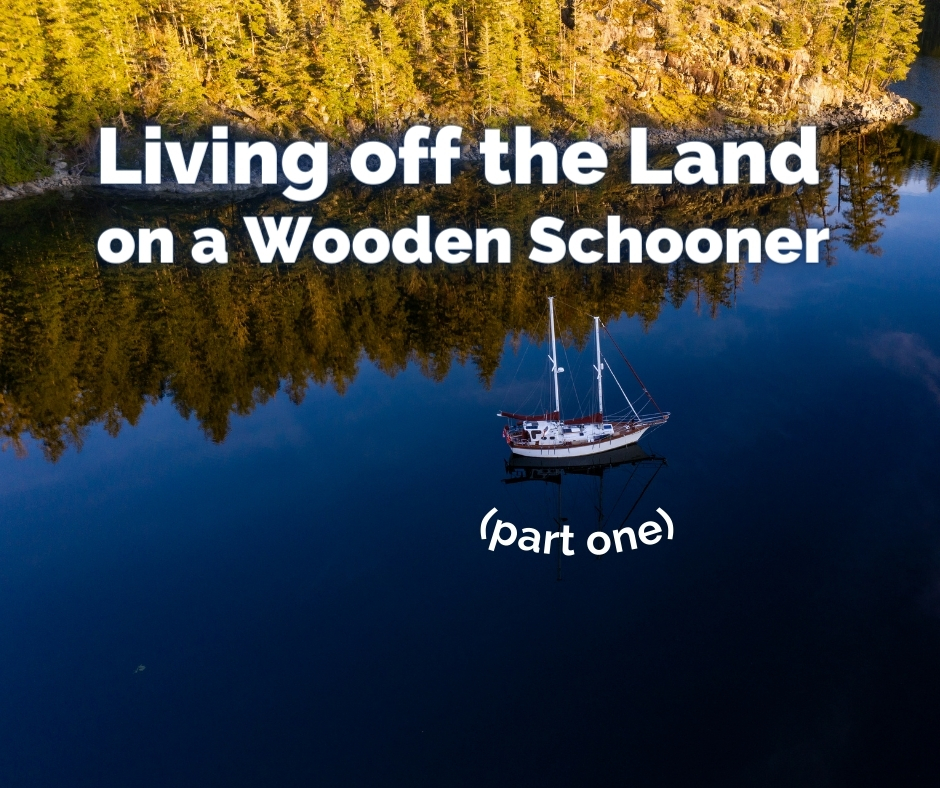 Taryn, Logan & Max travel BC West Coast board their boat Papa Rumba. You can follow their adventures at Wayward Life Sailing.

When we motored into the marina in October 2020, we were looking worse for wear. The two of us — Logan and myself Taryn — had just spent four months attempting to make our boat sea-worthy. We had thought she was ready for a full summer of adventures, when we purchased her six months earlier. We were exhausted and clearly showing it. Even after those four months, we were still months away from having a boat that was ready to sail and the disappointment of missing an entire year of cruising was showing on our faces.

In the marina, we tied up across from a beautiful 47 foot wooden schooner named Wind Gypsy. Her owners, Marty and Mae, quickly recognized the defeated look in our eye and generously offered to take us out sailing with them. They wanted to relight in us the passion for being out on the water and they knew that an adventure with them would be the perfect way to do that. It took us a couple of months to have our schedules line up, but in December we all piled onto Wind Gypsy and finally headed out of the marina to spend a few days in the incredible Desolation Sound.

If you’re reading this you are probably already aware, but Desolation Sound is a beautiful mostly uninhabited marine park area on the Sunshine Coast. It is a world-renowned destination for cruising, and for good reason. Not only is it incredibly beautiful, but as we learned, it is also home to many sea creatures and in the winter you can have the entire place to yourself.

Our first day on the water started before the sun rose. We were leaving from Campbell River and with the strong currents in Discovery Passage we had to make sure we timed our escape with slack current or we would risk having an uncontrolled and uncomfortable trip out into Georgia Strait. So, we were up and out of the marina before the sun broke the horizon.

The weather was perfect that day. Unlike the usual Pacific Northwest weather, this day held clear skies. As we entered the Georgia Strait the sun broke the horizon above Metlenatch Island, casting its reflection across the calm sea. It was in this moment that I remembered why we had chosen to live on a sailboat. We didn’t have very much wind that day, but we did have enough to raise all of the beautiful schooner’s sails as we glided towards the sunshine coast.

As we floated into Desolation Sound, we lost all wind. This was terrible for our desire to actually sail the sailing boat we were on, but any day out on glassy water is a good day and we were so excited to see the sun that we weren’t angry about not having our sails up any longer.

We turned down an inlet toward our first anchorage and made a quick stop to drop some prawn traps with high hopes of having some of these red creatures for dinner in the next couple of days. We then continued to motor towards one of the most beautiful bays we had ever seen.

Nestled among forested cliffs, we dropped anchor as the sun beginning to set. The last rays of the daylight illuminated the forest, bringing out the last oranges and yellows of the season. Our anchorage also contained a small creek waterfall and a short trail to a freshwater lake. Along the trail we found edible winter mushrooms which we collected for dinner and at the mouth of the creek we found the tastiest oysters we had ever eaten, large and incredibly fresh tasting due to their proximity to fresh water. We woke up before sunrise the next morning to catch low tide — the only way to collect some of these magnificent shellfish. Although eating oysters in the summer can be dangerous due to red tide, they were amazing in December and we felt that we were living like royalty with the food we were able to pick from our temporary back yard.

After picking oysters, we lifted anchor and headed to our next anchorage, picking up our prawn traps along the way. But you are going to have to wait until next month’s newsletter to hear that story and about the tasty food we made with our ocean harvest.