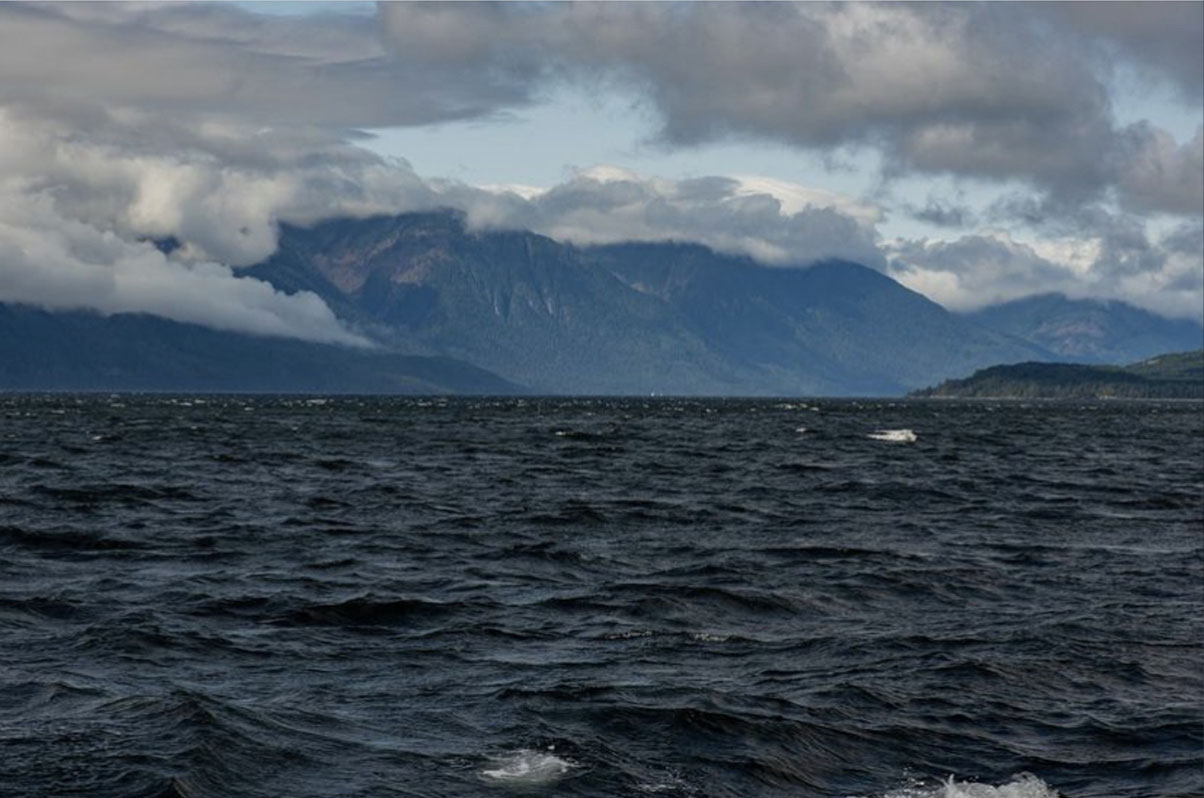 There are a few areas in the Pacific Northwest that are notorious for unpredictable, dangerous and exciting conditions.  One of those places in Johnstone Strait.  This stretch of water is a kind of gateway between the Salish Sea and the northern Pacific Ocean on the east side of Vancouver Island.  Water flowing to or from the Pacific enters the Salish Sea through the narrowing bit of water known as the Johnstone strait.  This narrowing channel creates fast currents that run up to 7 knots.  Whether heading north or south through the strait, there are obstacles that may appear in the waters including standing waves and whirlpools, or deadheads and logs in the water.  To top it off, most of this strait is flanked by tall mountains and fjords that reach deep into the sea and create their own micro weather systems.  These mountains and fjords regularly send winds into the strait from unpredictable directions, creating confused and often dangerous conditions.  May sailors have stories of sailing nicely down Johnstone Strait with 15 knots of wind and being hit on the beam with a 40 knot gust that knocks them down.

For months before we decided to head through this strait we heard cautionary tales and horror stories.  To say I was intimidated was an understatement, but my desire to make it north of the Discovery Islands was stronger than my fear, so we prepared to do it anyway.

When we started planning our trip to the Broughton Archipelago at the northern end of Vancouver Island, we knew that we would have to pass through Johnstone Strait at least twice because Johnstone Strait is the only way to sail from the Salish Sea to the Broughtons without going all the way around Vancouver Island. We carefully watched the weather and very carefully planned our journey north, and then eventually back south. We knew we didn’t want to be in the strait when there was strong or gale force wind warnings because of our lack of experience on the boat and some boat work we needed to do, so we decided to plan for days with calmer weather.

For this trip we had two major things to consider: wind strength/ direction and current. A northwest wind had set in early in the summer and seemed to be blowing strong or gale force winds every day from June to September. We made our way north of Campbell River, quite literally two days before the northwest winds set in and weren’t quite brave enough to head through the strait with the winds against us, so instead we hunkered down in the channels of the Northern Discovery Islands until we thought we had a calmer day to head through Johnstone Strait. This meant that we waited a week and a half for the right winds, but it was worth it!

After spending a week in the Thurston Bay area and another couple of days in Green Point Rapids, we woke up at 5am to the light of a full moon and left to catch the current out of Green Point Rapids. We had chosen to take the back route through the discovery islands in order to bypass as much of Johnstone as we could. Weather reports for the day said to expect light winds switching to southeast in the afternoon, which is exactly what we needed! So we left at slack current, with the rest of the day slated to have the current moving with us.

By the time we had reached the center of the strait, we were travelling at 8-9 knots at less than normal power with a 4 knot current pushing us forward. This is also where we realized we had made a dumb mistake with our fuel, but you can find out more about that in our YouTube video called “the Dumbest Mistake We’ve Made So Far”.

It turned out that we picked the perfect day for our travels north. Although there was almost no wind for sailing, that made the conditions a lot better than the 35 knots that would have been right on our nose if we had left the day before. The wind only picked up to about 10 knots SE on this entire journey, and when we had wind, we raised the sails to utilize it the best we could. But for the most part, the water was glass calm. It wasn’t great for sailing, but it was so beautiful that I wasn’t mad.

The trip on the way back, however, was a bit of a different story. We headed south in hopes that we could make it half way down the strait in a day. However, as we headed south the weather reports changed to much worse and winds started to build behind us. We knew that we hadn’t even reached the worst area for winds yet, and with 25 knot gusts hitting us early on in the day and expected to continue building, we decided to tuck into Port Harvey for the night. Weather reports were showing that the next few days were going to be as bad as the first one, but we had friends ahead of us who had nearly gotten themselves into some serious trouble farther down the strait, so we decided to play it safe and tuck in for the night, or if needed, a couple of days. The worst spot along the strait during northwest winds is usually between Port Neville and Helmken Island. This bit of water has winds that will blow from more than one direction at a time and there are very few opportunities to tuck out of the weather, so we thought it was best to avoid that stretch when winds were already higher than expected.

Luckily for us, the next morning we woke up to a very favourable change in the weather report and decided to continue our travels south. We motor sailed and motored our way to Helmken Island where we decided to spend our second night, all the time not seeing more than 20 knots of wind. Although we reached the island with 6 knots of current behind us, we were still able to make our way into a protected anchorage on the island as the current seemed to somehow die down to almost nothing close to the island itself. The rest of the day and night were dead calm and we had a great night hunkered down at the Helmken Island.

The next day brought a report that said the morning was supposed to be calm, but winds would be building later in the day. The current was favourable earlier on in the day, so we decided this was the perfect opportunity to finish the rest of our journey south. We sailed and motor sailed our way to Campbell River, caught a fish on the way, avoided any overwhelming wind and only had one dangerous experience along the way (losing our steering, which we also caught on video)!

Although some people might think we were overly cautious, we felt confident in our decisions in both directions of travel.  The next time we head through the strait we will have more experience on our boat and may feel more confident about heading into stronger winds, but we were happy with the decisions we made during our first trip through Johnstone Strait.

Written by Taryn from The Wayward life