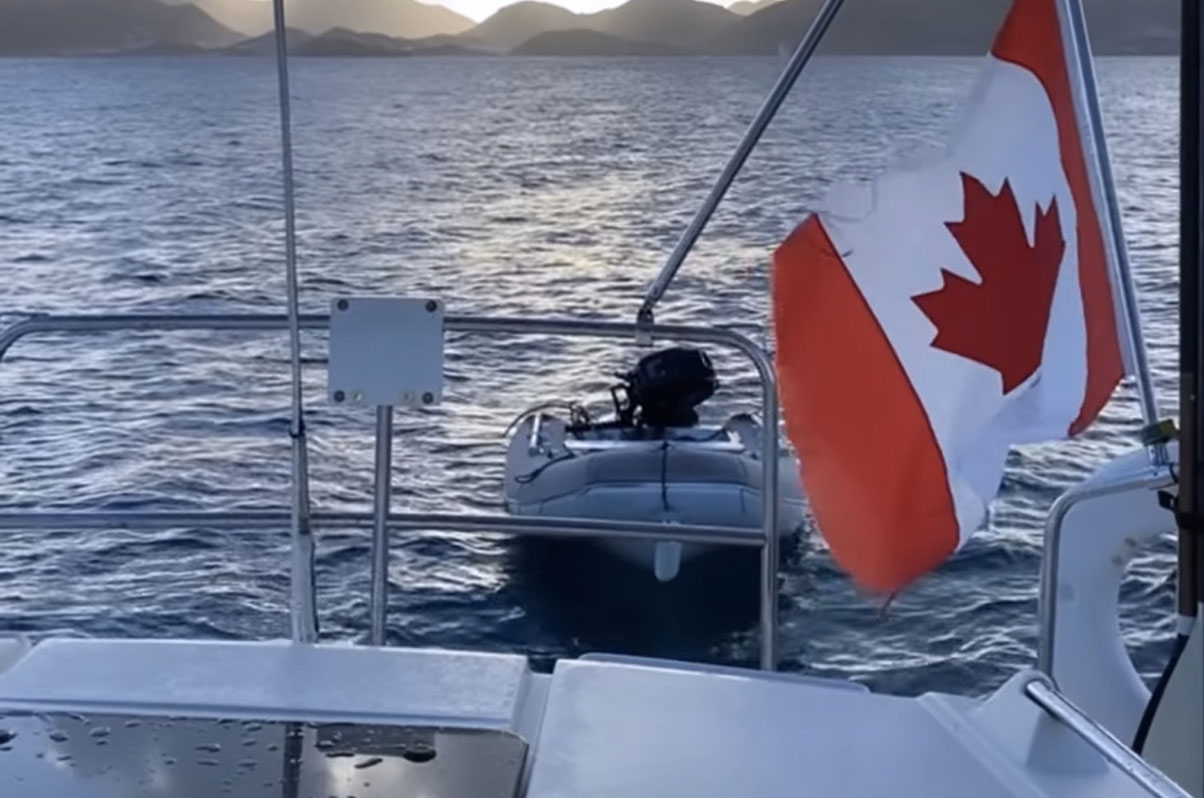 My whole life I’ve lived by Safety Second…until I became a boater.

It was early April in Ontario and we just bought our new dinghy and outboard. Like anybody else getting something new, I wanted to test it out right away. It was just above freezing that day and the water temperature was only 2 degrees Celsius or so,  but that didn’t matter to me. I have a new dinghy to test out! I bundle up with layers of warm clothing and head out. Boy, this thing rips!  I should probably hold on to the painter just in case, I think to myself.

At this point, I didn’t realize the safety of wearing the kill switch, I thought that was just for overly cautious people. How the heck would I fall off from a dinghy?!

Well, that thought came too soon. I proceeded to let go of the tiller in order to reach for the painter (still at full speed) and yup! as you could imagine, the dinghy decided it no longer wanted me in it. The motor jolts left causing the dinghy to make a sharp right turn and I was immediately thrown into the water.  Now in shock and in the drink, the dinghy is doing circles around me and I had no escape.  For some reason,  I was only worried about losing our new dinghy. I made three attempts in grabbing it and on the 3rd attempt, the propeller just missed striking my legs.  At that point,  I realized it wasn’t worth it and decided to hell with it, realizing land was nowhere near and exhaustion was starting to kick in.

I was freezing and feeing very heavy from the layers of clothing weighing me down (of course, I wasn’t wearing a life vest either). Making it back to the dock was now equally important.  I swam past the circling dinghy as fast as I could making my way to the closest dock.   Fatigued and feeling faint but this navy seals training camp was not over just yet!  The closest dock was a one-off, floating on its own so to speak, (certain docks were disconnected from on another over the Winter time in the marina.)  Once I climbed my way onto the first dock, I could see that the next one was a ways away, so I ran as fast as I could and leapt as far as my soaking wet layers would allow and into the water I go again.  Hoping my leap would shorten the frigid swim to the next dock before I repeated the gruelling process twice more until I made it to land.

I’ve pushed my body quite a lot in my lifetime with hiking, climbing and riding my BMX for a solid 14 hours straight but this ordeal sure tested my endurance under some harsh conditions.

Once I made it to land, all I wanted was a hot shower and to relax in comfort but nope, I had to figure out how to save our new dinghy.

I ran back to our boat, Jibsea and quickly changed into some dry clothing before trying to see which one of my Winter dock buddies were on their boat and willing to help.

Luckily, we had great neighbours and I found our friend Shane who was willing to help. We quickly jumped into is half sunken dinghy (it had been sitting all Winter) and off we went to lasso a rogue beast. I can only describe the attempt at trying to tame the damn thing as comical.  I had to jump out of the moving dinghy we were in over to my dinghy that was still spinning in circles and pull the kill switch out from the motor! Success! The motor turned off and I felt a sense of a relief.  After resting for a few seconds or so, I started her right back up and make my way back to our home dock, thankful that I had the best possible outcome for this situation. No injuries and the new dinghy and outboard were safe and sound.

Couple of pointers I’d like to mention after experiencing the above:

Follow us on our journey and life of adventure as we sail the beautiful big blue.