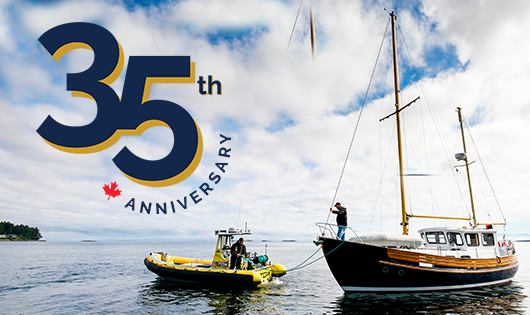 In 1984, with just one black, inflatable boat, and the drive and determination to succeed, Captain John MacDonald started a marine towing business that’s still in operation today. Though John is no longer with us, his vision for the company still lives on.

C-TOW Marine Assistance Ltd. started on Bowen Island, BC, where MacDonald and his wife Barb lived.

Brian Biddlecombe, owner of Cormorant Marine Water Taxi, also based on Bowen Island, was there when it all started. Biddlecombe was also involved with the area Coast Guard Auxiliary, and remembers MacDonald’s fortitude.

“This is well before the years of cell phones or anything, and Jim was so dedicated – some might use the word obsessed – with providing service that he basically slept with a VHF radio tuned to Channel 16 under his pillow,” Biddlebome reflected.

Maria Steernberg, owner of Vancouver-based SeaSnaps Marine Photography Ltd., has spent over 40 years on the water, and was also there from the beginning. She fondly remembers John and Barb, whom she highly regarded as very sociable and approachable.

“John was proud of what he was doing,” she said. “Over the years, I supplied them with photos and stayed in touch, because I’ve always liked having their name on my boat. And I like having the thought that I can call C-TOW.”

Paul Dupre, who took over the company in the early 2000s after MacDonald passed away, characterized MacDonald as “a hell of a guy. He was a real fit man and a joy to be with.”

MacDonald initially formed C-TOW owing to changes in Coast Guard legislation governing the type of coverage across Canada. The Coast Guard announcement outlined that they would only respond to emergency, life-threatening situations and would no longer be towing non-distressed vessels.

“In 1984 the Coast Guard changed their policy to assisting only those vessels in immediate distress,” current C-TOW owner Andy Cardiff explained. Founder and captain MacDonald saw the opportunity to fill the gap left by the Coast Guard and “he responded by forming the marine assistance company,” Cardiff shared.

Cardiff began his career in municipal government and made a career shift into the marine sector in 2006 when he purchased and operated a water taxi business in Pender Harbour on BC’s Sunshine Coast. The experience he gained getting to know the BC coastal waterways made him an ideal candidate to become a C-TOW captain. Three years later, he took over the company. Under Cardiff’s leadership, C-TOW is now operating across Canada, first making inroads into Ontario, then into Nova Scotia and Newfoundland.

While C-TOW’s primary customers are recreational boaters, the company also provides service to commercial fishing vessels and other commercial boats of generally up to 60 feet in length; some C-TOW towboats can also handle towing vessels up to 130 feet. Additionally, over the years, operators of sailboats, paddleboats and even jet skis (a growing millennial market, particularly in Ontario) have also called for C-TOW’s assistance.

Despite offering an essential service, C-TOW is a unique business in a niche market. A key challenge in growing membership is awareness of C-TOW’s capabilities and services. While some boaters may think it is not necessary to enlist the service, no matter how prepared one thinks they may be, it’s impossible to protect against the unexpected challenges presented out on the water. C-TOW is another tool for preparation, providing peace of mind for the unexpected.

C-TOW’s captains are assigned a contracted territory. They are then on call 24/7 to respond to all member and non-member calls, which typically come from either a Coast Guard broadcast or the C-TOW dispatch centre. Captains must possess a Small Vessel Operator Proficiency or SVOP certificate which allows them to operate Transport Canada-certified vessels up to 15 gross tonnes. Vitally, they must be available and ready to respond at a moment’s notice.

In BC, C-TOW captains are on call 12 months a year, though summer months are typically busier. In Ontario, the Maritimes, and Newfoundland, C-TOW operates just six months of the year, from May to the end of October.

For any company, success and longevity are a result of multiple factors. For C-TOW, identifying captains who have the skills and expertise required to competently navigate the waterways as well as provide assistance for a wide variety of issues, is absolutely key.

“Being consistent and reliable has been a big player in our success,” Cardiff notes.“When customers call they expect a level of professionalism and reliability, they expect good response times, and they expect captains with the skill and judgement to effectively tackle whatever the situation presents.”

Finding boat captains who meet C-TOW’s standards and requirements is an ongoing challenge, Cardiff says, but one which the company is managing effectively.

This is evident in the success of C-TOW Windsor, which began around six years ago with two boats and has grown to a fleet of six vessels. Owner and captain Darin Alderton explained that C-TOW Windosr will have anywhere from two to six vessels out on the water at any given time.

“It’s demand from the boating community,” he said, explaining the growth, adding C-TOW Windsor has exceeded their own expectations. This year C-TOW Windsor continues to grow, expanding their operation from Port Stanley to Grand Bend.

“I’m a helping person,” Alderton said when asked what initially drew him to C-TOW. “I used to be a firefighter, so I am always happy to lend a helping hand.”

Nanaimo and Dodd Narrows C-TOW owner, Captain Evan Hogarth, echoed a similar sentiment. Hogarth was operating a water taxi business when he took over the business three years ago.

“I saw it as a way to expand my business and help other boaters,” he said.

“It’s been fantastic,” he said of his experience, “I really enjoy the work. I really enjoy meeting the diverse client base, everyone from commercial fishermen to people chartering boats from overseas just discovering our coast for the first time, and everything in between.”

The work is a challenge, but rewarding, said Alderton.

“Long story short, you get a call, you go,” he explained, yet despite its demands, the job isn’t short on rewards.

“I went to Quiton Bay in the middle of Lake Erie, to help with a customer’s boat,” Alderton recalled. He was able to get the boat running and drove it back.

“The customer ended up becoming a life-long friend,” Alderton said.

When captains are responding to a call they have to be prepared for anything that may happen, he explained. If they’re not careful they can end up in the same situation as the people they’re trying to assist.

“A great thing about being a C-TOW captain is that you never know what the day will bring,” he added. “It could be a simple tow call, jump start, or fuel delivery. We’ve been in situations where a boat has flipped over and we’ve saved a life, situations where we’re right beside the Coast Guard helping them out.”

Although C-TOW is not a lifesaving service, the nature of the business adds a level of uncertainty to each call. When it comes to marine assistance, captains must be willing and able to rise to the challenges presented out on the water, never knowing how a given call will transpire. Ultimately, Alderton said, “The number one goal is making sure the customer is safe and happy.”

Michael McRobb, who provides towing and salvage services to the western Lake Ontario region, was the first C-TOW operator in Ontario. Cardiff invited him to join eight years ago.

“I responded yes immediately,” McRobb said. “I didn’t even think about it for a second.”

McRobb utilizes different vessels for different towing needs, including Bayliners, a Penn Yan and a Shamrock.

“It’s just a matter of pulling it the right direction, getting enough of an angle on the boat that you don’t fill it with water but you get a little bit of float out of it,” he explained.

“We responded two years ago to a 42-foot Express Cruiser in the middle of the St. Lawrence in American waters, stuck up on a shoal off Cornwall. And that took two days to get them off, but we go them off without any damage to their boat and towed them into Canadian waters.”

The introduction of the free C-TOW smartphone app, which automatically transmits a customer’s longitude and latitude coordinates to C-TOW dispatch, has been a game-changer, taking the “search” out of “search and rescue.”

“You just hit one button and your message goes straight to our dispatch; we know exactly where you are, which is very helpful,” Cardiff explained. “Sometimes people don’t know their exact location, and this takes the guesswork out of it.”

The app meets the needs of customers, and of all Canadian mariners, he explained.

“There were many American apps, but no Canadian apps that work specifically for Canadian waters, Canadian tides and Canadian marine weather. We are continually upgrading the app to enhance its effectiveness for our members and the boating community.”

In addition to providing immediate support to C-TOW customers, the app enables boaters to check Environment Canada marine weather, live weather reports submitted by C-TOW members and tide predictions from Fisheries and Oceans Canada, and provides information on nearby marines, fuel docks and marine facilities. It even displays the user’s boat speed and compass heading.

Looking to the Future of C-TOW

Educating the boating public on C-TOW’s services is still a challenge, but more and more mariners are taking advantage of all that C-Tow offers.

“People on boats often wait to call for help,” said Cardiff. “They’re trying to fix it themselves and they don’t realize how serious it is, and they wait too long to call, and then it becomes much more urgent. We always tell people to call us. At least give us a heads up that something is going sideways so that we can prepare and deal with the issue efficiently, rather than race to save the boater and vessel.”

“It’s nice to see C-TOW expanding across the country and offering what is needed, and good service, to other parts of Canada,” said Don Prittie, President of the BC Boating Association and owner of the Canoe Cove Marina located in North Saanich, BC. “I think that’s a very positive step in their development and in the development of boating safety across the country.”

SeaSnaps’ Steernberg agrees. “I think that in the marine world, [C-TOW is] as much a recognized name as the Coast Guard.”

35 years after it began, C-TOW remains at the forefront of the industry, in large part thanks to its tireless leadership and captains. From its humble beginnings as a one-man, one-boat operation, C-TOW is now the largest private marine assistance company in Canada.

“It can be difficult at times,” he admits, but looks to the future noting, “We’re blazing the trail. We’re creating the industry and working on legislation with the Coast Guard and other federal and provincial governing bodies. Everything we push through, we’re the first one. The most challenging position in any competition is to be number one, and that’s where we have been, are, and will remain.”

“C-TOW is very grateful to the Canadian boating public for supporting us,” he stressed. “Without them, we would not be where we are today.”

That continued support, over almost four decades, is a contributing factor to C-TOW’s focus as the company and its captains remain vigilant in providing consistent and reliable expertise to support Canadian boaters in the years to come.