Baby on board SAILING the Bahamas 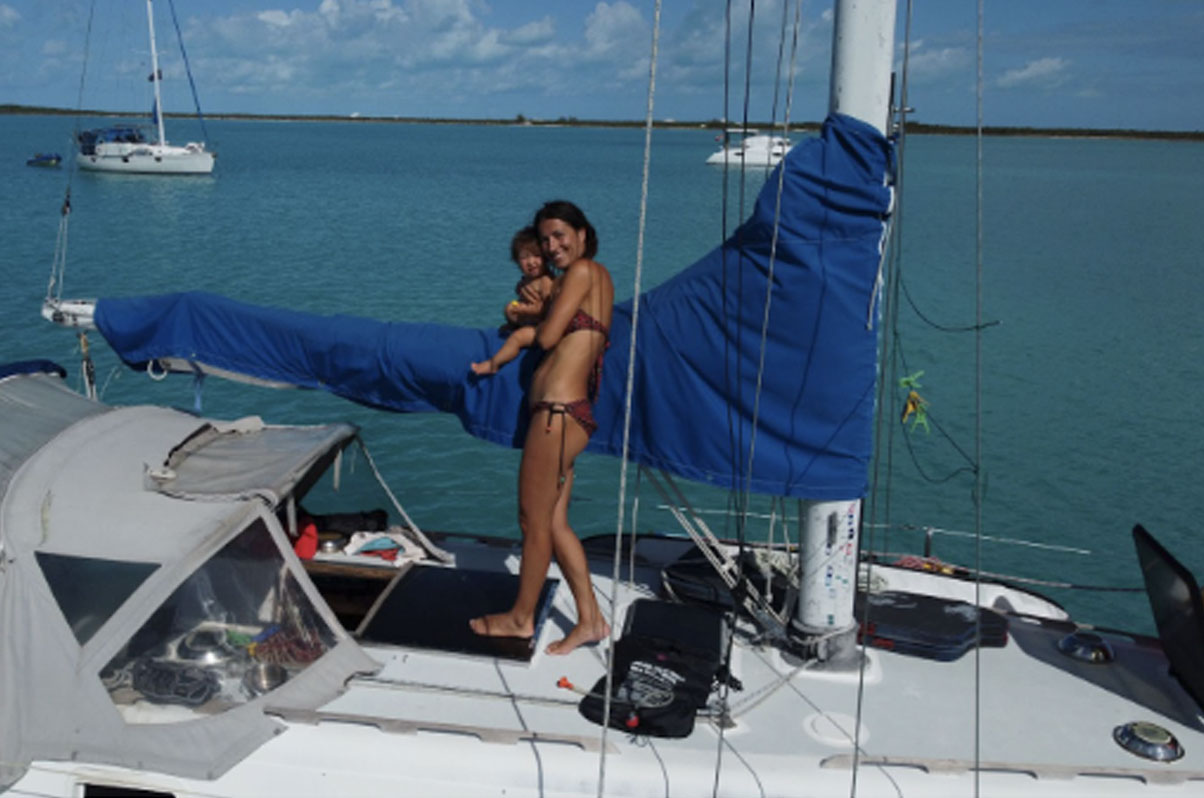 If you think sailing is challenging, exhilarating, stressful and pure magic all at once you are right. After owning our small 33 feet sailing vessel Wildly Intrepid for 4 years we thought we had everything under control. At least to the extent of boat managing, weather is a whole other story. However these last few months have proven us wrong.

This year we returned to our sailboat as a new family with our 4 month old baby Coral ready to tackle new challenges and excited to learn more. I don’t think one can really know what to expect even with watching others do it, reading about it and talking to others. Every child is unique with its own personality and agenda.

Coral’s very first big sail, other than pulling the sail out for short duration on the intracoastal waterway, was a non-stop 152 Nautical miles from West Palm Beach down towards the Florida Keys and across the Gulf Stream to Bimini in the Bahamas. Not even 17 hours later we were pulling anchor to sail another non-stop 206 Nautical Miles to Black Point in the Exumas. Needless to say we were all quickly introduced to what overnight passages would feel like with a very young baby on board. It turned out to be a little more hands on than expected. Good thing Cory was very familiar with our sailboat because he was about to pretty much single-hand her for a few days. I was aware that Coral could potentially get seasick but didn’t expect it would be on almost every sail onward. As soon as we made our East turn into the Gulf Stream, beating into waves and wind had her stomach turn upside down. Poor sweetheart she was in for a rough crossing and I was about to get a real good arm workout. Between feeling insecure and all this being so new to her she ended up spending most of the sail in my arms. When the wind nearly died on us and we motored through calm water in the Bahamas she finally settled into the passage and I could get a rest. Night watches were also very different. We usually take turns every three hours or so but between breastfeeding and seeking my comfort Cory managed the boat a lot more than I did.

On the other hand, adventures by dinghy turned into her favourite thing. So much to look at, like birds and turtles or other boats. With so many distractions and the sound of our 2-Stroke outboard she would quickly fall asleep in my arms. Even going out free diving with her and taking turns she would be constantly looking around or sleeping in the bottom of Scoby, our dinghy. She was taking on the cruising life quite well. The funny thing is that she prefers dinghy rides over car rides so she might just be made for living on a sailboat.

When she turned six months she finally could crawl around, this moment she had been looking forward to for a while. This opened a whole new world for her. Watching her experience the sandy beaches was hilarious. First few minutes would involve getting familiar with her surroundings. Every beach in the Bahamas has its own texture and mixture of sand and corals. Very focused she would dig her fingers into the sand over and over. Then she would bring a handful of sand to her mouth to taste. We were both relieved when that sand eating phase was more or less over. She would then start speed crawling all over the beach sometimes chasing after us, others trying to catch a crab. She would even crawl towards the sea and at times swallow a little too much water if there were crashing waves. The protected side of islands and shallow beach sand are her favourite because she can then crawl into the water without gulping salt water.

Sailing with a baby makes you experience everything with a new set of eyes and a different perspective. It opens doors once closed to a young couple. Mingling with the locals got easier all of a sudden and we met so many of them, especially kids. More than once a bunch of kids would  come running towards us to see little Coral. Her reaction to all this attention was priceless between excitement and confusion. They all wanted to hold her or touch her, even pinching her cheeks. Once a grandma even took off to bring her daughter’s 5 month old to meet Coral. Prior to having a baby we never connected with so many kids or even adults. Sometimes you are seen simply as a tourist but this year I felt like we were more part of the local culture.

Eating meals with a baby can be difficult especially when it seems that she needs more attention during meal time. But we had more than one waitress run off with her in their arms while we were left to enjoy a meal without bouncing her on our legs. Or being out for a walk and locals offer us a ride because they don’t want the baby to get overheated under the strong Bahamian sun. Next thing you know we are getting a sightseeing tour of the island. We do see families travelling with young kids but under one seems to be not very common. Maybe that’s why most locals are all over her and wanting to make her laugh or hold her.

Something else which I didn’t think would happen was how my risk tolerance has gone down. Cory and I both come from a high adrenaline and outdoor adventures background. From rock climbing to caving to whitewater sports or snowboarding we tend to take a bit more risk than some. But being new parents has made us much more cautious. During squalls we normally would not be too worried but with a baby we just worry for her. Only a few days ago while sailing North as Tropical Storm Alex was making its way passed Florida we decided to set sail. It was blowing a good 25 knots but we were protected by the Exuma chain and getting very small waves. A perfect day to be out for a sail and with sunshine to top it off. Next thing we knew was a dark cloud coming straight at us. The first part of the squall was punching some strong wind but the doomsday kind of sky had the best of us. Cory yelled out to go down below deck and threw on his life jacket. Good thing we only had a small sliver of sail out because even that was too much for this 50-60 knots wall of wind and rain. SV Wildly Intrepid heeled over while water was pouring over the dodger, the rail was in the water and waves built so quickly. I was terrified as I held Coral tightly in my arms while singing lullabies. Her eyes were wide open but she was not crying. She could tell this was an emergency and not our usual kind of sailing. Part of the head sail tore and Cory struggled to furl it back in. Our small 13Hp engine couldn’t fight the wind and we moved sideways at less than 2 knots. The relief when I heard that Cory could see the end of it is hard to describe. Under normal circumstances we both would have been on deck but with our now 8 month old baby we had to handle everything differently.

When sailing or out for day adventures you have to plan everything ever so carefully. You want everything accessible; new diapers, a water bottle, a change of clothes and some toys because sometimes it’s hard to grab things. When the waves get bigger and you only have one free arm to work with you really want everything nearby. It’s not the time to start digging to find what is needed. The same goes for dinghy or land adventures, make sure to have a change of diaper so that you don’t have to change plans and go back home earlier.

Cruising the Bahamas has been a constant learning experience. Coral has shown us the world from a very unique angle and has tested our parenting skills more than once, as well as adapting how we sail together. We have had to rethink the way we do everything and plan passages more carefully to keep everyone on board safe and happy.

Cory and Alex share their adventure with weekly videos on their YouTube channel “Wildly Intrepid Sailing” and share stories on their website www.wildlyintrepid.com . Their dream is to travel the world and to live without any regrets.