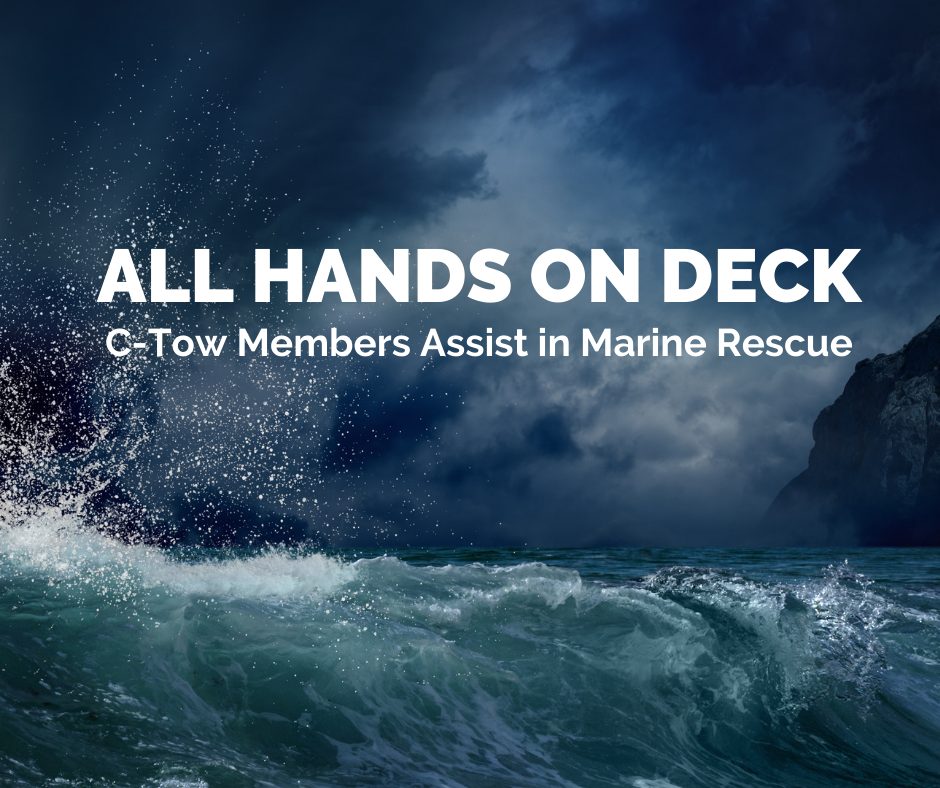 It’s quick thinking and camaraderie amongst mariners that often goes a long way in keeping everyone safe on the water. Whether it’s C-Tow, the Coast Guard, civilians or a combination of all of the above, we are always thrilled to hear stories that have happy endings.

Back in July, the Stella Blue, a Sabre 402, began to take on water. C-Tow members Bren and Clay Scorah were nearby in their own vessel Sanssouci, a Beneteau 43. What follows is the story of a marine rescue, in the words of Bren:

The weather windows to slog your way north are few and far between. So after a month and a half waiting for Cape Mendocino to calm down we were finally on the move from San Francisco, with hopes of making it at least to the northernmost port in California, Crescent City; a planned 48 hour passage [on route home to Campbell River on Vancouver Island, BC.]

We left San Fransisco at O-dark-30 in the fog and in the fog we remained with less than a half a kilometer visibility chugging along on the engine as there was no wind and big swells. On July 18th around 8 p.m. about eight miles south of Point Arena and five miles off shore we were preparing to start our night shift schedule when we heard a Pan, Pan, Pan broadcast between a vessel taking on water and the Coast Guard.

At first we thought they were closer to Fort Bragg but when we heard the GPS coordinates we realized that we were in the area and could see a blip a few miles out on the radar. We hailed the Stella Blue to offer assistance and so began a long exhausting night shift.

At first they told us that they felt they would be ok until the Coast Guard arrived. After closing that conversation the Coast Guard hailed us and asked if we would mind standing by with the Stella Blue as they were about an hour and a half away, something we had already decided to do. Shortly thereafter the Stella Blue changed their call to a MAYDAY, MAYDAY, MAYDAY.

Over the next half hour or so we came up close to the 40 foot Sabre and helped them with a few supplies (exchanged between boats in five foot swells and thick fog.)

They were taking on water through the rudder post seal, had been hand pumping for three hours and the bilge pump wasn’t keeping up.

The Coast Guard had launched a helicopter which we could hear overhead but couldn’t see and as the fog was so thick they couldn’t help us. They also launched a rescue vessel out of Fort Bragg whose time of arrival kept pushing out and was still an hour and a half away. So Wally and Laurie, a couple in their 70s, and their two younger crew members made the very tough call to abandon ship.

In the dark and swelly night we launched our dinghy as coming alongside with our vessel would have been way too dangerous. They gathered a few personal belongings (a day pack each), climbed into our dinghy and we circled back around, grabbed the dinghy line and brought all four of them onboard Sanssouci to await the arrival of the Coast Guard.

Clay and I were in contact with the USCG Rescue boat the helicopter and USCG base throughout the whole ordeal. The helicopter overhead couldn’t get to us because of the fog and they had to go back to base as their fuel was limited.

With everyone safe on board Sanssouci we waited until the rescue boat arrived, at about 10:30pm. When the vessel arrived they first stopped at the Stella Blue to turn off her EPIRB and her mast strobe, furl in her head sail and removed any jerry cans of fuel. They then made their way over to our boat.

It was a huge vessel and in the dark very swelly foggy night I had to try to hold Sanssouci steady-ish while the rescue boat came alongside; Clay helped transfer the crew of the Stella Blue across the midships to the USCG vessel, no tying up, no walkway! It was a very intense procedure to say the least.

They arrived back in Fort Bragg in the wee small hours, wet, cold and a bit seasick but safe and sound. We believe that the Stella Blue eventually sunk.

Finally at around midnight we were able to continue on our way towards rounding Cape Mendocino. We switched off shifts a couple of times in the night but we both were full of adrenaline and didn’t sleep much.

We were really hoping the next 36 or so hours to our destination would be more peaceful and I’m happy to say it was!

As a follow up to our rescue at sea story, on July 24th we received a phone call from the Coast Guard thanking us for everything we did in helping to rescue the crew of the Stella Blue.

They requested our address so they could send us something in official recognition of our assistance! It was so kind of them to contact us.

Thank you to the Scorahs. If you have your own story from the water you’d like to share with Towline, send us a message!